Standing at the rim of Bryce looking out across the valley, with tunnels, walls, and hoodoos below. Note the trail from Bryce Point to the Peekaboo Trail goes through the snowy tunnel (bottom right) in the snowiest section of the photo… It made for an epic hike (see Trip Report in the next post).

What is Bryce Canyon?

A Rancher’s Perspective: “It’s a helluva place to lose a cow!” was the reply of the park’s namesake Ebenezer Bryce, a rancher who lived in the area for just 5 years (1875 – 1880) before moving on to greener pastures. “Not wrong,” I smiled, suddenly imagining the challenge of tracking down a lost cow, or anything else for that matter, trapped in the maze of rock spires and walls of Bryce Canyon.

The view from the clifftops at the Eastern Edge of the Paunsaugunt (pronounced “PAWN-suh-gant”) Plateau, better known as the rim of Bryce Canyon, revealed a spectacularly beautiful landscape of colorful (pink, red, white, and yellow striped) pillars and walls of rock extending skyward (up to 150 feet) from the valley below. On the valley floor these otherwordly features created countless miles of frustratingly labyrinthine (and potentially unstable) paths a cow could wander off in. Trying to find a cow in that maze could easily lead to frustration for even the most patient rancher. There was nothing romantic about Ebenezer’s view of the area. It was a cold, hard, and practical description, but it didn’t quite capture the spirit that I was looking for…

The icy Peek-a-boo trail descending through a maze of colorful rock figures from the rim at Bryce Point.

A Paiute Perspective: the history of the area according to the Paiute people, who lived in the area for roughly seven centuries before Bryce arrived, as told by an elderly Paiute man in 1936, follows:

“Before there were humans, the Legend People, To-when-an-ung-wa, lived in that place. There were many of them. They were of many kinds – birds, animals, lizards and such things, but they looked like people. They were not people. They had power to make themselves look that way. For some reason the Legend People in that place were bad; they did something that was not good, perhaps a fight, perhaps some stole something….the tale is not clear at this point. Because they were bad, Coyote turned them all into rocks. You can see them in that place now all turned into rocks; some standing in rows, some sitting down, some holding onto others. You can see their faces, with paint on them just as they were before they became rocks. The name of that place is Angka-ku-wass-a-wits (red painted faces). This is the story the people tell.” – Indian Jack (1936)

It was certainly a much more engaging description, and seemed more fitting for the place. Hiking through the area (before I learned the history) on the Queen’s Garden Trail and Navajo Loop at sunrise (see upcoming Trip Report for Brcye Day 2), it seemed like I was hiking through a garden, or city, of golden petrified giants. 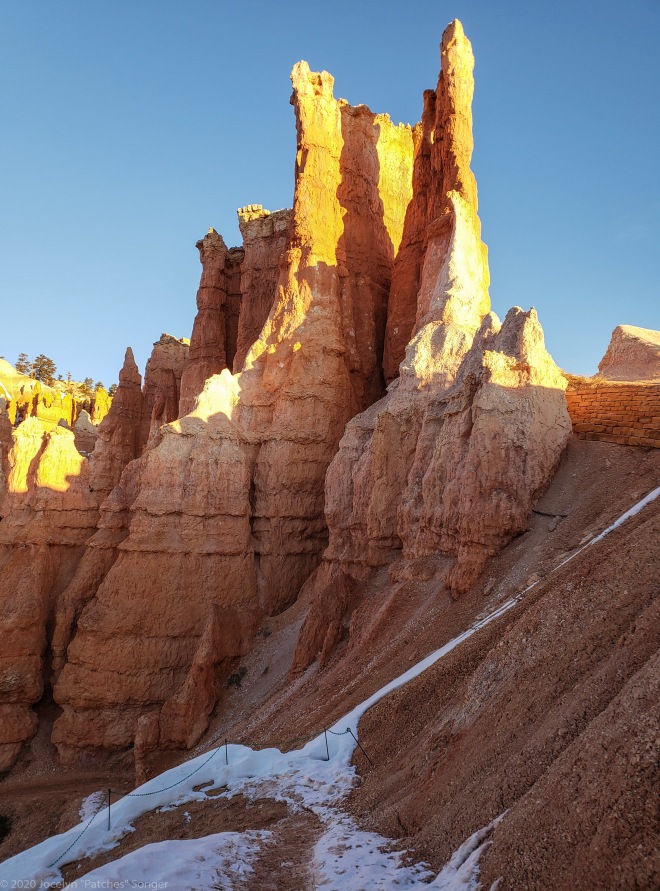 The Queen’s Garden Trail winding in and around colorful castle-like rock formations at Bryce.

A Government Surveyor’s Perspective: In 1876, a government surveyor named T.C. Bailey put his impressions of Bryce Canyon down on paper:

“Immediately east and south of the last corner set, the surface breaks off almost perpendicularly to a depth of several hundred feet — seems indeed as though the bottom had dropped out and left rocks standing in all shapes and forms as lone sentinels over the grotesque and picturesque scenes. There are thousands of red, white, purple, and vermilion colored rocks, of all sizes, resembling the sentinels on the walls of castles, monks and priests in their robes, attendants, cathedrals, and congregations. There are deep caverns and rooms resembling ruins of prisons, castles, churches with their guarded walls, battlements, spires, and steeples, niches and recesses, presenting the wildest and most wonderful scene that the eye of man ever beheld.” – T.C. Bailey (1876)

As I’d hiked through Bryce on Day 1 of my adventures (see “Bryce – Solo Winter Adventures in Utah: Day 1)), it seemed like I was hiking through the middle of giant versions of the drip castles I’d made at the beach as a child. In addition to the geological forces at placce (described below), the continued weathering of the fins and spires causes mud etc to drip from the top of the figures, and creates the stalagmite-like texture to the statuesque features of Bryce.

A geological perspective: According to the National Park Service (NPS) ,

“The park’s most noted feature is the eroded landscape below the east rim of the Paunsaugunt Plateau. Technically it is not a canyon, but rather a spectacular series of more than a dozen horseshoe-shaped amphitheaters.”

So, standing at the rim of Bryce, I was actually standing on the Eastern Edge of the Paunsaugunt Plateau, with a lot of cool amphitheaters with wildy interesting geologic features resulting from erosive processes dominating the view of the valley.

Looking out at the walls cliffs on the Eastern Edge of the Paunsaugunt Plateau, and all the erosive features below.

According to the NPS, “The erosional force of frost- wedging and the dissolving power of rainwater have worn away the colorful and weak limestone rock of the Claron Formation into bizarre shapes, including slot canyons, windows, fins, and spires called ‘hoodoos’.”

This four panel image by: Brian Roanhorse/NPS illustrates the process of hoodoo formation: 1) Erosive processes create gullies along the edge of the Paunsaugunt Plateau, 2) eventually the rocks break down into walls, 3) continued erosion results in the formation of windows, and 4) finally, arches collapse leaving individual hoodoos.

The first documented use of the word hoodoo in American English was in 1875, and it referred to  a traditional form of folk magic that evolved from practices in Central and West African cultures, that “were brought to the United States during the time of the slave trade.” Although the term is sometimes used to describe “mountain magic,” it took a bit of searching to figure out how/when the term started being used to describe geological features.

As far as I can tell, the geological use of the term ‘hoodoo’ stems from the Yellowstone area in the 1870s, and 1880 is the first published use. 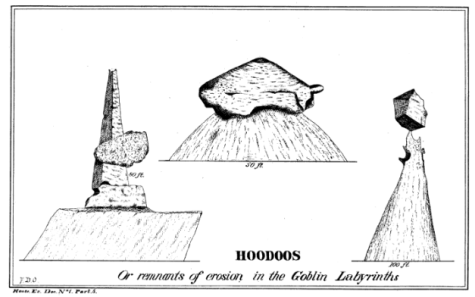 In 1870, a small group of miners encountered a “region of countless remnants of erosion, so wild, so weird, and spectral that they named it the ‘Hoodoo’ or ‘Goblin Land’,”according to The Annual Report of the Superintendent of the Yellowstone National Park to the Secretary of the Interior for the Year 1880 (1881, p. 6-7; also published in The Report of the Department of the Interior, 1880, p. 576 – 579). The Superintendent of describes the term ‘hoodoo’ as ‘a mountain phrase.’ In 1880 he conducts a follow-up exploration of the area, and provides three illustrations of  the “hoodoos or remnants of erosion in the Goblin Labyrinthes” as well as the following description of the hoodoos:

“The frosts and storms of untold ages in an Alpine climate have worn about a dozen labyrinths of countless deep, narrow, tortuous channels amid the long, slender, tottering pillars, shafts, and spires… In shape they are unlike any elsewhere known, being a cross between the usual spire and steeple form, and the slender-based and flat, tottering, table-topped sandstone monuments near the Garden of the Gods in Colorado; and while lacking the beauty of these, surpass both in wild, weird fascination. The… fragments of rocks of nearly every formation and shade of coloring… represent every form, garb, and position of gigantic human beings, as well as of birds, beasts, and reptiles. In fact, nearly every form, animate or inanaimate, real or chimerical, every actually seen or conjured by the imagination, may be here observed.” – P.W. Norris (The Superintendent of Yellowstone), 1880

A Hiker’s Perspective: The winter hiking was spectacular, the views were phenomenol, and I enjoyed every minute I spent at the park. My favorite part of my time at park? Sunrise. Both from the rim, and nestled down among the hoodoos, the sunrises were phenomanol.

Stay Tuned for the Trip Reports from my recent vacation hiking and backpacking in the State and National Parks in Southern Utah, including 2 trip reports for winter hikes in Bryce!

4 thoughts on “What is Bryce Canyon? Hoodoo?”