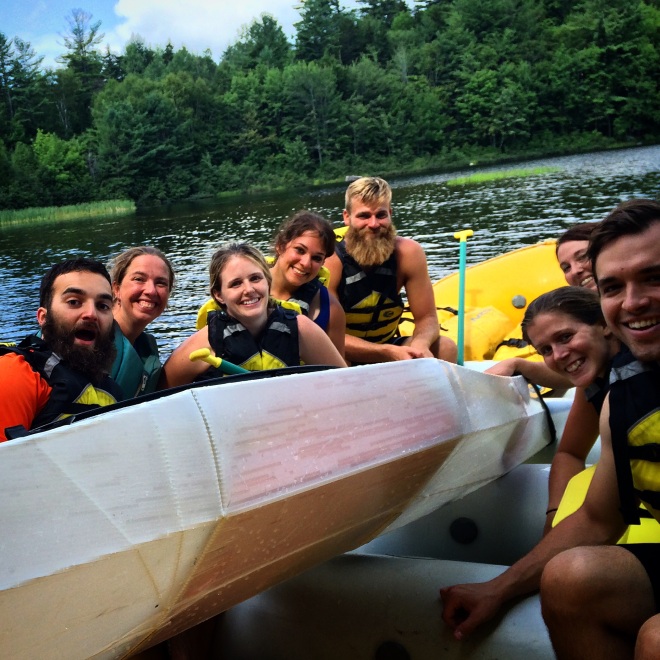 Part 4 of the story of my ill-advised whitewater kayaking trip down the Penobscot river picks up with me looking like a drowned rat at the base of Big Ambejackmockamus Falls (class IV). The first three parts of the story can be found at:

“Are you ok?” the kayaker on the rocky outcropping above me shouted, noticing me for the first time. I looked up, catching a glimpse of the tip of my kayak churning around in the whirlpool right behind her.

END_OF_DOCUMENT_TOKEN_TO_BE_REPLACED

This place is like summer camp for thru hikers. There’s a bunkhouse and a bunch of small cabins with central shower and bathroom facilities. There is even a small outfitters store so that you can buy essentials like snickers bars and soda. There’s almost always somebody throwing a case of beer on the table and offering to share… And the evenings are full of trail magic with cars driving by and dropping off gatorade and snacks people think that the hikers might like.

I got in to the hostel early on a hot summer afternoon and got talked into going tubing down the Nolinchucky river with five or six other hikers. On the way to putting into the river Sarg told us the rules. Drinking in the tubes is ok, shoving the empty cans between the tube and cover is not ok. He then told us to beware of “rock enemas” and that our take out point was at the really big beach we’d come to in 3 to 3 1/2 hrs. We asked for specifics, but he assured us, “You can’t miss it”.

Suddenly we hear the rumble of rapids ahead of us. Sounds like fun? We were a little nervous since there was enough of a drop over the rapids that you couldn’t see the water on the other side of the drop off. Everyone finished off their beers so they could hold on tight to their rafts. The rapids were pretty impressive (probably because of all that rain I’ve been complaining about). One of the guys dumped impressively, got tossed around the rocks, and lost his tube into a whirlpool. I saw that he was ok, so went after his tube (he was already at least 100 yards downriver). I grabbed my tube and slid into the water so I could grab the other tube. I was surprised that I couldn’t reach the bottoming the river where I was, but I’m a strong swimmer so I held onto my tube and swam over and grabbed the other tube. With a tube in each hand I then navigated the rest of that section of rapids and returned the tube to my fellow hiker. Between the two of us we only ended up with slightly scuffed up knees as souvenirs of that ordeal.

We all sat on the shore at the base of those rapids letting the adrenaline disperse from our systems a bit. As we were sitting there another group of people came down the river and got separated from their tubes and tossed about in the rapids. These guys were wearing life jackets though (why hadn’t Uncle Johnny’s provided us with some?), which seemed like a good idea. Once again, I swam into the middle of the river to do tube retrieval. Having done some whitewater rafting bin the past, I would guess that the little section of rapids when we went through it was probably class IV.

We floated down river for another hour without hitting much of anything more than a class II rapid and started wandering about where the take out point was. One of the guys stopped to help and old man get his fishing lure unstuck from the rocks. It turned out that the tent sites immediately across the river was where we were supposed to take our rafts out and get picked up. There was no beech anywhere in site. If it hasn’t been for the random act of kindness and the fishing lure retrieval we would have missed it!

Sarg came and picked us up, and then regaled us with the story of Erwin’s infamy… The story of Murderous Mary. Apparently Murderous Mary was an elephant that killed it’s trainer and was put on trial for murder. The elephant was found guilty and sentenced to death! They had trouble executing the sentence though… According to the story they tried to shoot her and failed, then they tried to electrocute her, but didn’t have enough power. Finally, they decided to hang her, but they even botched that on the first try (they forgot to unchain her from the ground before hoisting her up in the crane). They had a postcard of the hanging in the hostel (the photo and caption are below). Sarg said that they wanted to make up t-shirts that said, “I’m hung better than Murderous Mary”, but that folks thought it was inappropriate. Sarg then wrapped up the story by telling us that Murderous Mary and that handling of that case was Erwin’s “claim to shame.” Despite the caption on the postcard, it didn’t sound like it was handled very humanely. 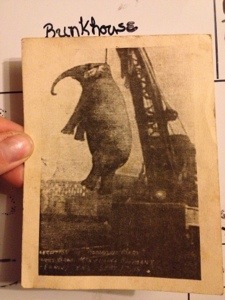 After we got back to the hostel, I was starving, so when Sarg offered to drive us into town to get food I said I’d like to go. There were only two of us and we were going to different places off of the highway so he said he’d drop me off at the off ramp, and pick me up again at the on ramp in 15 minutes on the return trip to the hostel.

I got my food and walked over to the on ramp, sat on the curb and waited while I ate my take-out food. Then, still waiting, I called my mom to chat since I didn’t have cell service at the hostel. As I chatted with my mom time passed and still no shuttle. Three different guys in pickup trucks stopped and offered me rides, which I kindly declined. Eventually Sarg came back… He’d forgotten all about me and had left me abandoned on the side of the highway. He didn’t remember to come and get me until someone back at the hostel asked where I was!

Anyway, I definitely had some exciting times at Uncle Johnny’s even though they were incredibly disorganized and the facilities seemed a bit run down.

Sublime... a transcendent failure to sublimate, rippling into beautiful sculptures of snow and ice, sastrugi today, melted tomorrow... it's hard to believe that the temperatures are going to climb from the teens of this morning into the sixties over the weekend. #whattheweather #optoutside #winter #sastrugi #snow #orangeairport #sunset #hiking #walking #massachusetts #wanderlust
Sometimes you just have to 'get a grip' and head off into the sunset... Note: when the path is shiny, sometimes it helps to have spikes... Even if it makes you seem rather alien ;) #optoutside #hiking #walkingwithspikes #alien #sunset #massachusetts #ice #snow #family
Mom thought we were taking the Christmas Tree down, but then I started "helping" and the number of "Happy New Year" trees started increasing ;) #happynewyear