26 days lost, alone, and starving. Inchworm (Geraldine Largay) had gotten lost while backpacking along the Appalachian Trail and had survived for at least 26 days before perishing in the backwoods of Maine. I didn’t want to imagine it, but as I read the heart-wrenching words in her journal, imploring whoever found her body to let her loved ones know that she was dead and where to find her, I couldn’t help it. It’s the kind of thing that both tragic heroes and horror stories are made of.

END_OF_DOCUMENT_TOKEN_TO_BE_REPLACED

Entering the section of the Appalachian trail between Andover, Maine and Stratton, Maine was a very sobering experience for me because it is the section of the trail where a hiker, Inchworm, disappeared without a trace earlier this year.

My first day on that section of the trail I had gorgeous weather and got stunning views from Saddleback Mountain. I thought a lot about how much I love these woods, these mountains, and the journey that I’ve been on for the last few months. 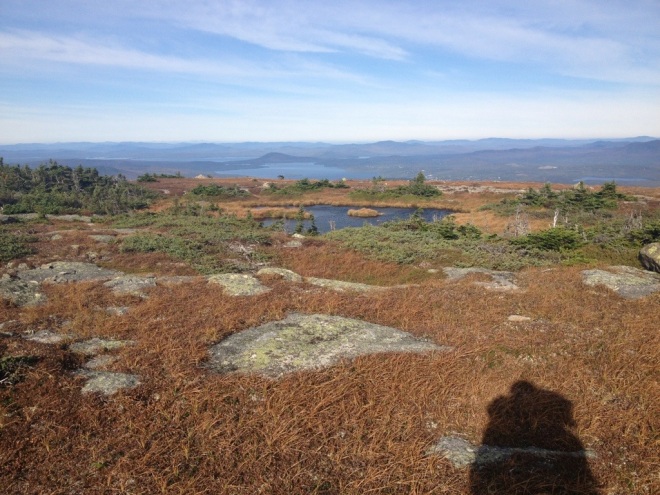 At the next shelter there were lots of notices about Inchworm. They provided details about where she was last seen, what she was wearing, what to do if we came across any hiking equipment or evidence that might be connected to her disappearance.

Unsurprisingly, I kept thinking about her as I hiked away from that shelter and towards Lone Mountain, the last place that she had been seen. It seemed sad that she disappeared alone somewhere between Lone Mountain and the next road crossing. I wanted my thoughts to somehow reach out into the wilderness and to find her.

I thought about death, and how it impacts family and loved ones. What do you want people to do in memory of you? I decided that I’d like people to care for the people that I care about, and that I want everyone to take a vacation… for an afternoon, for a day, for a weekend, for a week. I want people to dream a dream or live a dream in memory and in honor of me. Right now taking the time to appreciate and live your dreams and to share your dreams is really important to me. I hope that hiking the AT was living out a dream for Inchworm and that by continuing to live our dreams we honor her and her memory.

As I hiked past Lone Mountain I kept scanning the woods for any sign of her or any sign of where or how someone might just vanish from the trail. The trail was incredibly well marked and easy to follow. It was hard to imagine how someone could disappear from it without a trace.

I spent the night at the next shelter along with a bunch of other thru-hikers. We talked about Inchworm and the trail we’d traversed so far and we talked about the weather. The forecast for the next day called for rain and almost exactly the same weather conditions as the day that Inchworm disappeared.

I’ve been a solo hiker for the entire trail and I feel incredibly comfortable hiking alone, but I realized that with the exact same weather conditions on the exact same stretch of trail that a solo hiker went missing on earlier this year, that I’d prefer to have company. Davy Crocket had been getting up around when I do, and hikes at a similar pace, so I asked him if he’d hike with me the next day.

When I awoke the next morning it was pouring rain. The weather forecast was right, it was going to be a wet and yucky day. We climbed up Spaulding Mountain and the trail was wet, but not really any different than the hundreds of miles of wet trail that I’d traversed solo in the past few months.

As we approached the summit of Sugarloaf the trail flooded. Not just a little bit of water, but lots of water, enough water that you had to check and double check that you were following the trail and not one of the dozens of waterways/steams that were created as all of the rainwater tried to find the fastest way off of the mountain that it could.

Just a little bit of rain, and I was suddenly able to envision a scenario where you could get lost in those mountains if you weren’t paying close attention, or if it was dark. I still felt like I would have been comfortable on that stretch of trail solo, but was glad to have company nonetheless.

As we continued descending Sugarloaf the roar of rushing water in the background got louder and louder until it sounded like a freight train. Beautiful waterfalls had sprung up in all of the ravines and were feeding into the river below. The river below… I suddenly remembered the one little word in parentheses from the guidebook… Ford… The other streams it had said that about I’d crossed without even getting my feet wet, but I had a feeling that that wasn’t going to be the case this time.

Finally the trail dead ended at the river. It was a muddy, rushing, roaring torrent with class IV white water rapids. How was I going to get across that?! I decided it was a good time to take a break, eat a snack, and come up with a plan.

Davey Crocket and I discussed it and decided that if the water was more than waist deep that it wouldn’t be safe to cross given the incredibly rapid current. I took my rain pants off (I didn’t want to deal with the extra drag in the water and was going to get soaked anyway), double checked the waterproofing of the contents of my pack, made sure that the hip belt and chest strap on the pack were unclipped (you want to be able to quickly escape your pack if you fall in or submerge), and stepped into the river. Within two steps I was in rushing waist deep water. I reached out with my hiking pole to test the next step and it would have put me into even deeper water (by about two feet) and that was before getting anywhere near the middle of the river where the fastest current was. Clearly we couldn’t cross the river there.

We bushwhacked 1/4 mile up the river and 1/4 mile down the river and attempted to find a place anywhere in between where we could cross. We spent an hour and a half waist deep in that river trying to find somewhere, anywhere, that we could safely cross. We had no luck. Cold, wet, and tired we gave up. There was no way that we were willing to endanger our lives to cross that damn river.

As we sat by the river contemplating our next move we thought about Inchworm. After a little bit of rain this river crossing was clearly incredibly dangerous. Even the testing of the waters that we had been doing wouldn’t have been a good idea if we were there alone as solo hikers. It was very easy to envision that river making someone disappear.

There was nowhere to tent, and no way to cross the river, which left us with just one option, to retrace our steps and to reclimb Mt Sugarloaf (the second highest peak in Maine). We were not in the best of spirits as we headed back up Sugarloaf. Our plan was to reclimb it, then hike down the ski slopes and then get a ride into town. We’d face that river again on the following day.

On our ascent we met Jungle Gym and Midway. After hearing our story and seeing our pictures they decided to join us on our detour over Sugarloaf. Coming down the ski mountain the weather brightened and we were rewarded with great views of the fall foliage and with a beautiful rainbow. It raised our spirits a little bit, but it was a challenge to get over the frustration of having to turn back at that blasted river. 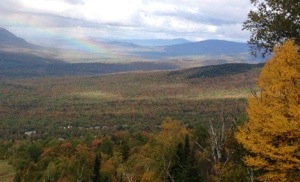 The next day we returned to the river and the waters had receded. There was no evidence remaining that would suggest the danger that had lurked there just the day before. What a difference a day can make! 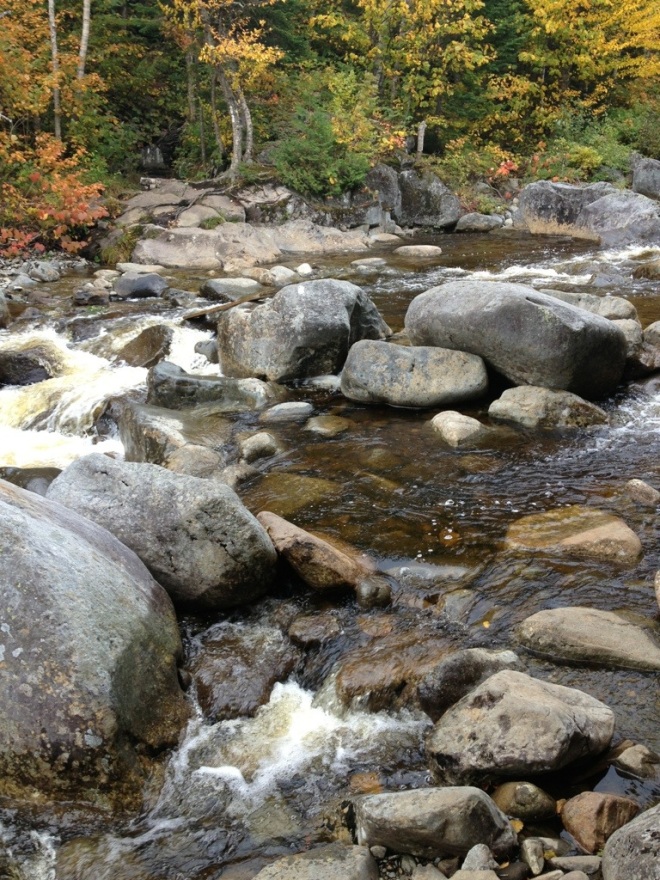 It was definitely eerie, having to turn back because the trail was too dangerous to continue on, and having that happen on a section of trail in which a hiker had disappeared. Did that river take Inchworm from us? It was definitely a stretch of trail for sobering thoughts.