“Phhhhuuht,” something I’d never heard before snorted outside my tent at 3 in the morning. I let out a sigh of my own as I rolled over and grumbled, “Go on now, Git!” And, hearing whatever it was shuffle off, I promptly fell back asleep.

It was my last night in New Mexico and I’d found the perfect campsite in a high Wilderness meadow. It was an awesome spot that would give me both a sunset and sunrise view, and (I almost managed to convince myself) it would even give me a tiny bit of protection from the wind. Although I’ve mostly been cowboy camping, I decided to pitch my large, ghostly white tent as the sun began to set over the distant mountains. It would actually provide some shelter from the wind, but more importantly it would make me look bigger and more visible to the elk and the mountain lions that might be roaming through the meadows.

The sun cast the most beautiful golden light onto everything as I pitched my tent against the battering 40+ mph winds. I’d never used my free- standing tent in winds this high, but I figured this would be a good test since if it didn’t hold I’d just cowboy camp per usual or retreat into the nearby trees. The gravel wasn’t holding the stakes very well against the high winds so as the sunset hues shifted from gold to red I built tiny cairns over each stake so that they would hold firm against the wind.

I finished up and sat with my pack watching as the sun dropped into the haze of distant forest fires, the entire orb of the sun, a huge red ball of light lingering on the horizon for a moment before slipping behind the mountains. What an incredible last sunset and night in New Mexico!!

I crawled into my sleeping bag, happy and content, and tried to convince myself the tent really would hold against the wind despite the shimmying of the center pole and the flapping of the tent fabric. Eventually I managed to fall asleep.

At around midnight I woke up, either from the pressure on my bladder or the surprise at the sudden stillness as the winds finally faded away. I crawled out of my tent and just stood outside gawking at the night sky. The Milky Way stretched from horizon to horizon, filled with shimmering stars and a depth that you only can see on dark, cold, moistureless nights at altitude. It was truly breathtaking. I got lost in the stars until I started to shiver, which reminded why I’d left my tent to begin with, I had to pee.

If my pajamas were thicker or the night warmer, I would have lingered outside longer. Instead, I tied the flaps of my tent open and pulled my sleeping bag forward a smidge so when I laid down I could still keep my eyes on the stars. All cozy in my sleeping bag I drifted off to sleep gazing at a truly spectacular New Mexico night sky.

“Phhhhuuht,” something snorted outside my tent, waking me up just a short while later. “What was that?” I wondered groggily. After ~6000 miles of backpacking I thought I was pretty familiar with most of things that go bump in the night. The two things I least want to be woken by are mountain lions and bears. If you’re lucky enough to hear a mountain lion it sounds cat- like and this definitely didn’t sound cat- like, and bears tend to grunt more and smell like wet dog. Besides, I’ve heard lots of bears and this didn’t sound like a bear. A herd of elk had kept me up snorting and buggleing at me a couple nights before, but this was something different.

It snorted again. It was behind my tent so I still couldn’t see it. Definitely not a cat, not a bear, not a cayote, not elk, not deer, not porcupines. “Go on! Get out of here!” I instructed whatever it was, and it seemed to respond, so I went back to sleep.

“Phhhhuuht!” It was about an hour later, probably 3 am, and my snorting creature had returned to wake me from my slumber. “Ugh,” I let out a sigh of my own as I rolled over and grumbled, “Go on now, Git!” And, hearing whatever it was shuffle off, I promptly fell back asleep.

Sometime between 4 and 4:30 in the morning I woke up again, not from any noise, everything was quiet and still, but because of a bright, blood- red light that didn’t make any sense. I rolled over and opened my eyes to see where the weird light was coming from. There was a sliver of red light rising like a flame from behind the mountains on the distant horizon. “Ah,” I smiled letting out a sleepy, yet contented sigh. A tiny sliver of the moon was rising through the haze of far-away forest fires. It was beautiful, and I watched, transfixed, as the tiny flame slowly grew into the much more recognizable crescent of the waning moon. The previous night, my sleep-addled brain had watched the same phenomena through a misty, mossy, tree-covered forest and had been very confused, initially convinced that humans had settled nearby with a campfire, then realizing that wasn’t possible, I had dreamt that it was fairy fire until I finally woke myself enough to realize it was a brilliant red moonrise and not a fire at all. 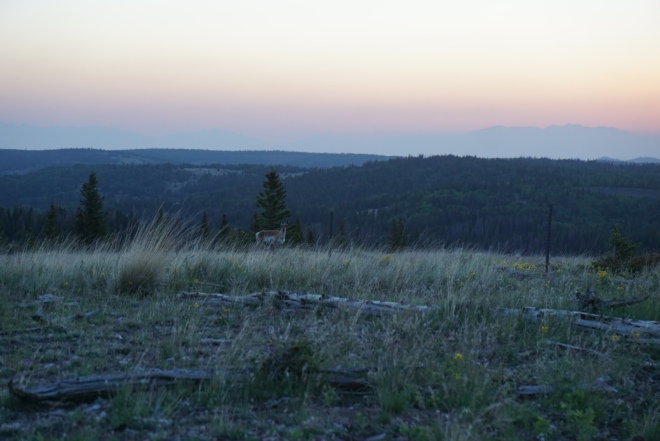 By the time the moon finished rising, the sky was beginning to brighten with the impending sunrise. I decided that it wasn’t worth trying to go back to sleep at that point. Sleep simply wasn’t meant to be on my last night in New Mexico. Instead I sat up and started lazily preparing for my day.

“Phhhhuubt!” I looked up from my snack bag, and there in the predawn light was a pronghorn antelope looking right back at me. “Ahhhhhh, that’s what you are,” I exclaimed with surprise. I didn’t know there were antelope in New Mexico! I fully expected it to run away as soon as I said anything, but it didn’t. As soon as it noticed that I noticed it, it walked three teps towards me, then stopped and posed.

“Well, that’s unusual,” I muttered while pulling out my camera. The wildlife never knowingly walks towards me. I wondered if antelope get rabies as I snapped a quick photo of it. Rabies will make animals walk towards humans. Before I even finished the thought the antelope bounced away. The way the antelope bounced, almost straight into the air, was so comical it completely distracted me from any worries. I sat there chuckling for a moment and watching the early pastel colors filling the sky before getting back to packing.

Not 5 minutes later I looked up and the antelope was back. As soon as I noticed it, it posed for me, walked three steps towards me, posed again, and then bounce, bounce, bounce it was gone. “Weird,” I exclaimed and went back to packing. 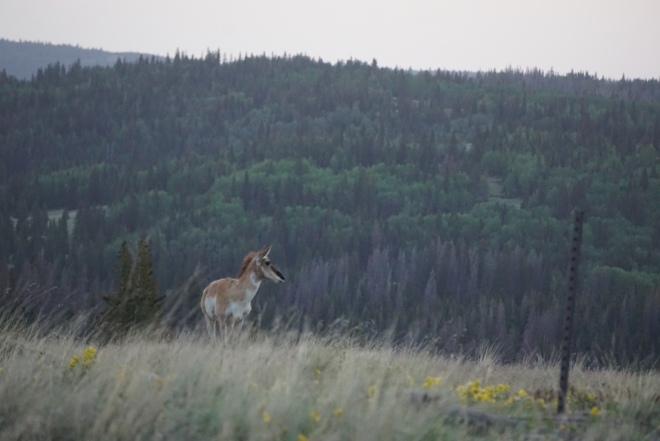 “Phhhhuubt!” I looked up and the antelope was back again. Apparently she’d gotten tired of waiting for me to notice her so she began snorting to get my attention. Pose, pose, bounce, bounce, bounce.

“I’m sorry, I don’t know how i’m supposed to respond,” I apologized. Was this some sort of weird mating dance? I was sporting all the same colors as the antelope with my ghostly white tent and my sand colored pants, shirt, and hat.

Pose, pose, bounce, bounce, bounce. The routine continued as the sun rose, round and red in the distance. It was beautiful, and I have to admit that I enjoyed having the company of another living creature to appreciate it with (even if I knew it wouldn’t work out). Hiking alone through New Mexico I hadn’t had the opportunity to enjoy much company.

Pose, pose, bounce, bounce, bounce. I was kind of sad when I realized that she wasn’t following me anymore, but she had definitely made my last night in New Mexico very memorable!