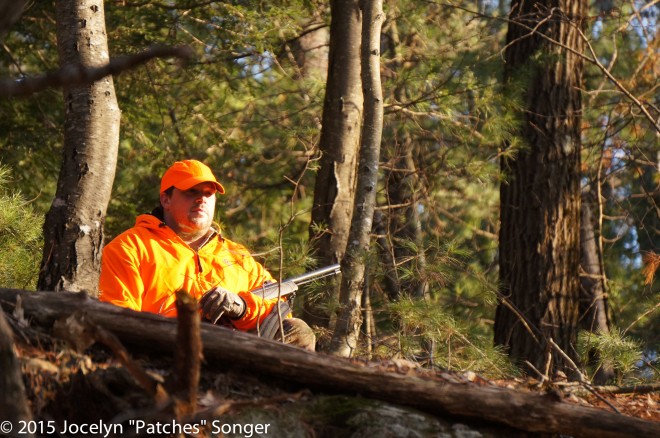 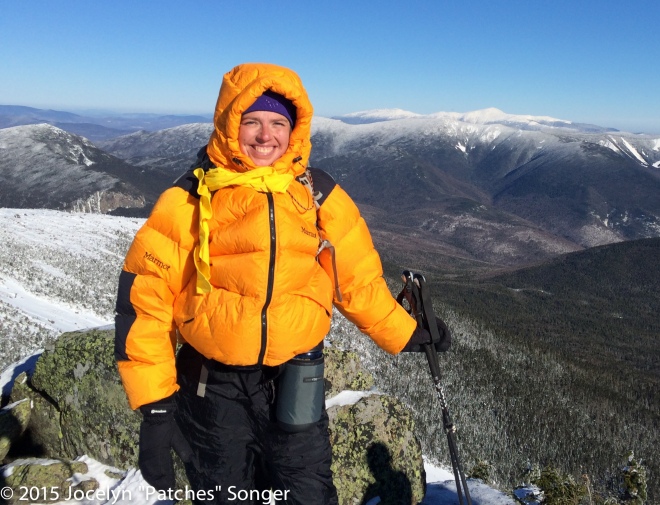 “Pop!” another shot went off, “Pop!,” And then another. I frowned as the AT was bringing me closer to the hunters and not further away from them. As a 4-season hiker and backpacker I share the mountains and the woods with hunters; I just want to make sure that I do it as safely as possible. That means being both seen and heard! Since I didn’t have enough blaze orange on, and my path was predetermined by the route of the Appalachian Trail, I opted to make my presence known with the only tool I had on hand: my voice. I started singing. Loudly:

As I hiked through Vermont singing, I remembered that I’d run into this same issue last year on a section-hike of the New England Trail during the week between Christmas and New Years. I’d known that the regular deer hunting season ended by the second-week of December, but I’d failed to take into account the ‘primitive firearms’ season which runs until December 31 each year. On that trip I ran into five hunters for every deer track I’d seen. Even though they’d surprised me, I hadn’t surprised them. All of the hunters had both heard and seen me coming long before I’d seen them; still, I’d like to give them as much advanced notice as possible! 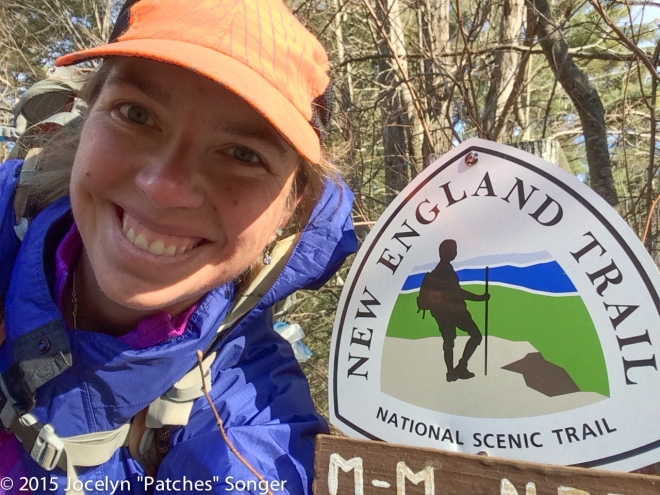 September through November I always remember that it’s hunting season and I wear my blaze orange, but for some reason in late December I forget that there are still plenty of people in the woods with guns that are shooting at things. I don’t want them to accidentally shoot me, so I want to make it as easy as possible for them to see me, and avoid me… blaze orange it is, but, how much blaze orange should I be wearing as I wander through the woods in the winter? (Check out the educational video below, which has information about how much hunter orange you need, and how visible it is).

The safe bet seems to be to wear the same amount of blaze orange they recommend that the hunters wear: a blaze orange hat during most of the hunting season and 500 square inches of blaze orange on the head, chest, and back during shotgun season. Perhaps due to my motorcycling background I figure if I I’m going with high-visibility for hunters, I might as well go high-vis all the way, so here’s my high-vis hiking gearlist/wishlist:

Once I have my blaze orange gear, the tricky part is remembering when hunting season actually is so that I’ll know when I’ll need wear it… The answer varies by state (check the listings near the bottom of the post), but it’s a good bet that you should be wearing blaze orange whenever you go out into the backcountry between September and May. For example, in Massachusetts hunting season started on September 8, 2015 (with deer archery season), and will extend until May 23, 2016 with the end of wild turkey season.

Is hunting really allowed on national scenic trails like the Appalachian Trail? 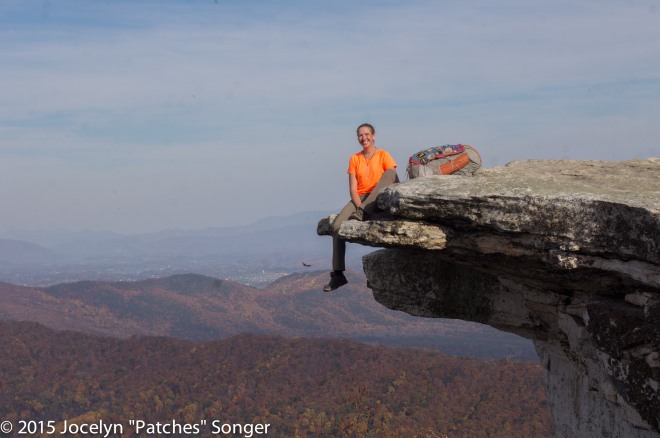 Yes! Hunting is allowed along most of the Appalachian Trail, or at least 1,250 miles of it according to the Appalachian Trail Conservancy. For a large portion of the remaining 900ish miles, hunting is allowed just outside the 1000-foot wide AT corridor. On my thru-hikes I’ve encountered a fair number of hunters on the trails: on my 2013 AT thru-hike I ran into turkey hunters on the trail in Georgia and North Carolina in May, as well as moose hunters in Maine in October. On my 2014 PCT thru-hike I ran into hunters in the woods of both Oregon and Washington, and on the New England Scenic Trail I ran into dozens of hunters in late December.

I hike the trail, from dawn to dusk
Whene’er the skies are blue
I wear synthetic clothing
Like all the hikers do! 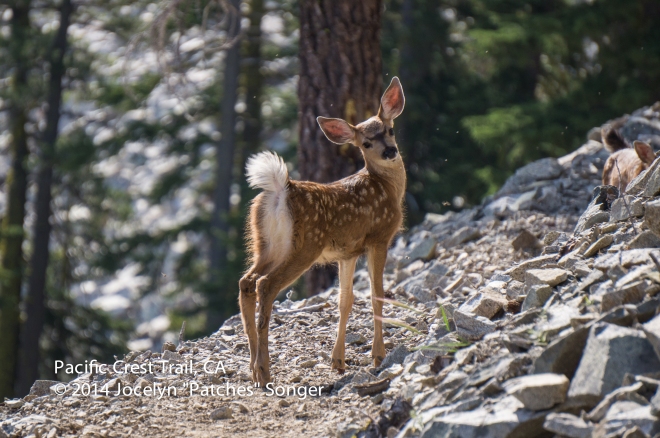 As a thru-hiker I’ve heard gunfire on the trail so often that I’ve started to recognize, and be able to tell the difference in, the patterns of sound between: people firing at clubs and ranges (there’s a spot on the AT in Pennsylvania where the firing range sounds disturbingly close to the AT), people randomly firing at objects and targets (hiking through the desert on the PCT provided plenty of data points for that), and hunters firing at game (see above)…

I like red meat and ice cold beer
I’m gnarly like a root
I climb up over mountains
There ain’t no need to shoot!!

As if the sound of frequent gunfire wasn’t enough evidence of gun use on the trail, on the PCT there were shell casings all over the trail… I ended up making a game of keeping track of each new type of casing I saw, just like I was keeping track of each new type of flower: there were casing from handguns, shotguns, and rifles in all shapes and sizes… Too many to count! Thru-hikers have a tendency to write-out the mile-markers for the long-distance trails using sticks, stones, and pine cones. But near mile 500 of the PCT the only thing around were shell-casings, so I made my mile-marker out of them :-P 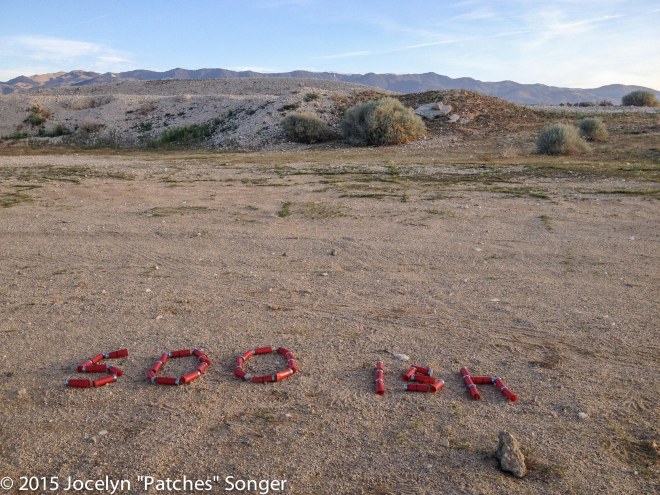 Since there are plenty of folks with guns out there, take a minute to review your local hunting seasons and land-use rules before heading into the woods this winter, and remember to wear plenty of blaze orange! Below are links to hunting information for the states that the AT, the PCT, and the Florida Trail cross through, along with a rough range of the current hunting season to give you a sense for why you want your blaze orange if you are thinking about doing a lot of winter hiking, or setting off on a thru-hike:

Hunting Seasons on the Appalachian Trail:

Hunting Season for the PCT:

Hunting Season for the Florida Trail: 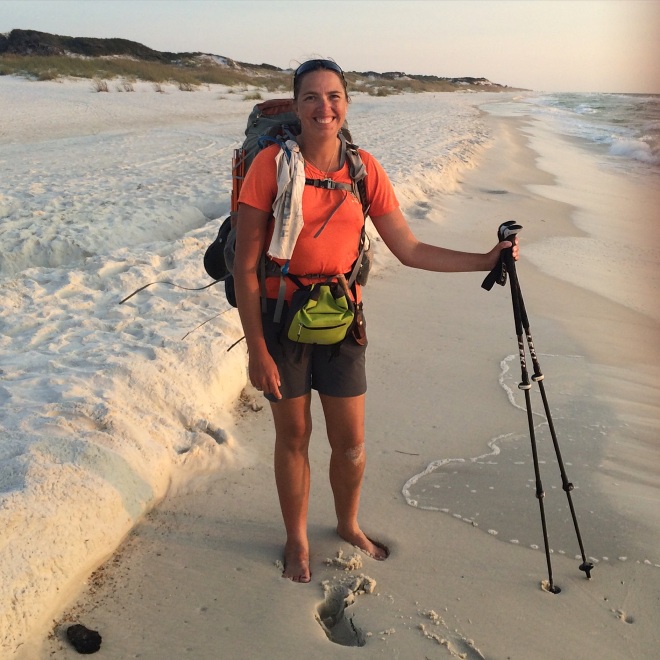 All together now, let’s sing (To the tune of Monty Python’s Lumberjack Song):

I’m a hiker and I’m not a deer
I sleep all night and I hike all day
I’ve got a pack, upon my back
And boots upon my feet.

I hike the trail, from dawn to dusk
Whene’er the skies are blue
I wear synthetic clothing
Like all the hikers do!

Cuz, I’m a hiker and I’m not a deer
Howdy hunter lets be clear
I’ve got 10 toes, 10 fingers too
An awful lot like you!

I like red meat and ice cold beer
I’m gnarly like a root
I climb up over mountains
There ain’t no need to shoot!!

I hear gunshots, I eat my lunch,
I go to the lava-try.
I follow the white blazes
Singing loudly and off key

Cuz I’m a hiker and I’m not a deer
Howdy hunter lets be clear
I’ve got ten toes, ten fingers too
An awful lot like you!

I like Bambi stew, and duck confit
My whiskey strong and neat.
I should be wearing orange
Now wouldn’t that be sweet!

Cuz I’m a hiker and I’m not a deer
Howdy hunter lets be clear
I’ve got ten toes, ten fingers too
An awful lot like you!

2 thoughts on “‘Tis the Season for High-Vis Hiking… (Hunting, blaze orange, a high-vis gearlist and more)”