The pouring rain made me question my sanity as I headed over to the Charles River Canoe & Kayak kiosk in Allston/Brighton to meet up with some new friends for our 4th of July kayaking adventure. It was 5 pm, and I was surprised by the complete and utter lack of traffic on Rt. 2, Rt. 16, and Soldiers Field Road… I made it to the parking area in 15 minutes (a commute that takes over an hour during rush hour), and was even more excited to discover that the parking lot was half empty. 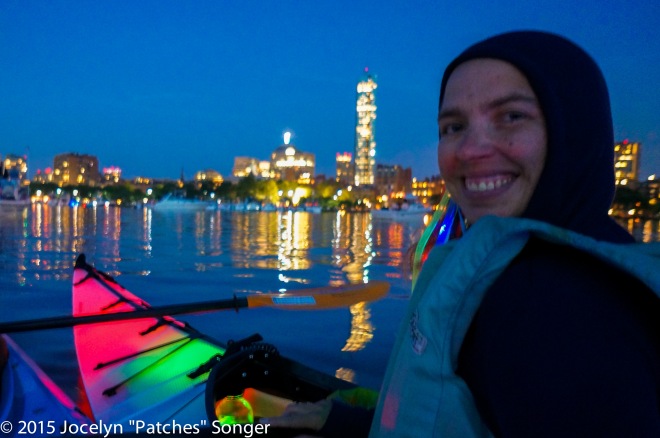 I set up my Oru Kayak and filled it with the 10 remote-controlled wireless lights I’d purchased (and waterproofed) for the occasion while my friends picked up the tandem kayak they’d reserved…We waited a while for the rain to stop, then used the restroom one last time before launching our kayaks at 6 pm. 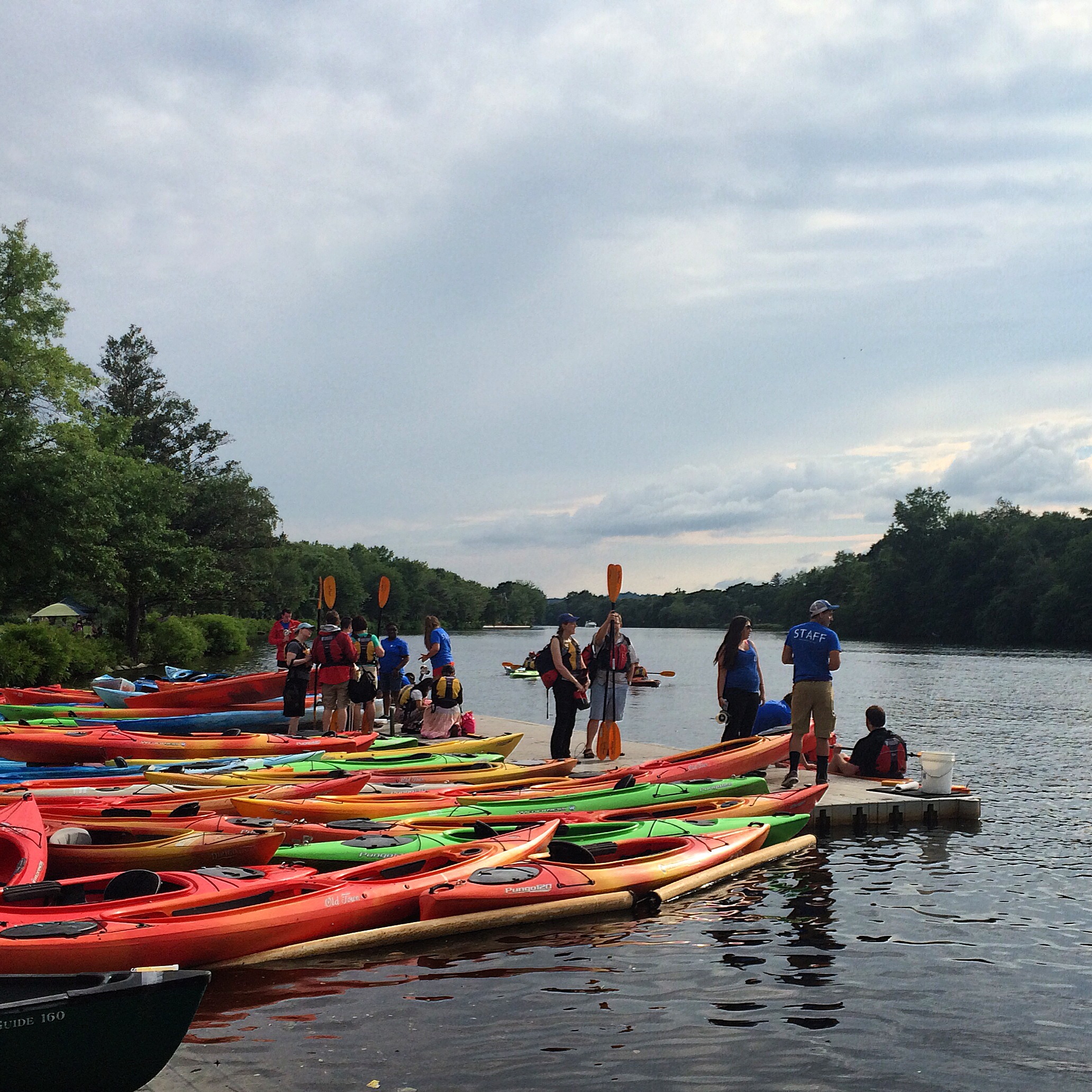 There was a steady stream of kayakers, canoeists, motorboats, and small yachts making their way down the Charles river and headed towards the Massachusetts Avenue Bridge, but the river didn’t feel crowded and the paddling was easy… except when the motorboats and yachts zoomed by… Some of the smaller motorboats, didn’t seem particularly mindful of the 6 mph speed limit, or the etiquette suggesting they pass through the central arches of the bridges (we didn’t see any police enforcement until we were within 300 meters of the Mass Ave. bridge)… 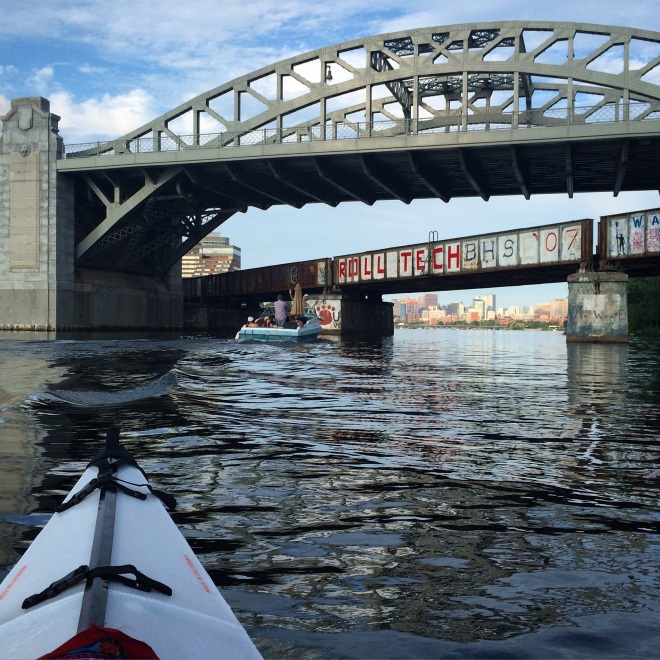 In the narrower sections of the Charles River (between the Eliot bridge and the River St. bridge) this meant that they created impressively large waves in their wake, which were especially nerve-wracking under the bridges where the wakes generated standing waves and weird interference patterns.

If the motorboats were behaving badly before the fireworks, and presumably before they began drinking, what was the return trip going to be like?

Luckily, by the time we got to the BU Bridge, the river widened and the wakes of the motorboats stopped being an issue. Even more amazingly, the sun came out and we were rewarded with amazing views of the of the Boston city skyline (including the golden dome of the statehouse) in the early evening light. 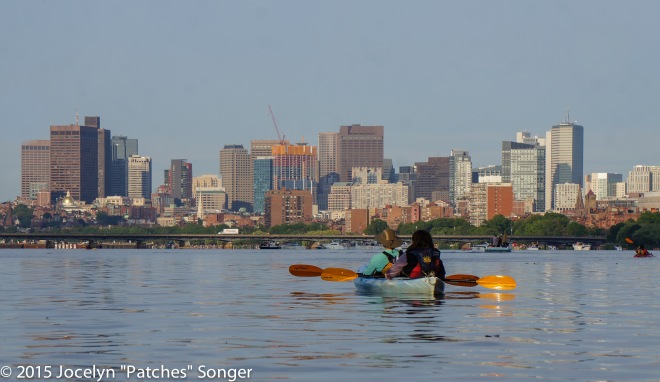 At around 7 pm, we reached the west side of Massachusetts Ave (the blue anchorage zone), where I guessed that close to 50 small boats and yachts were already anchored and another couple dozen kayaks/canoes were milling about. 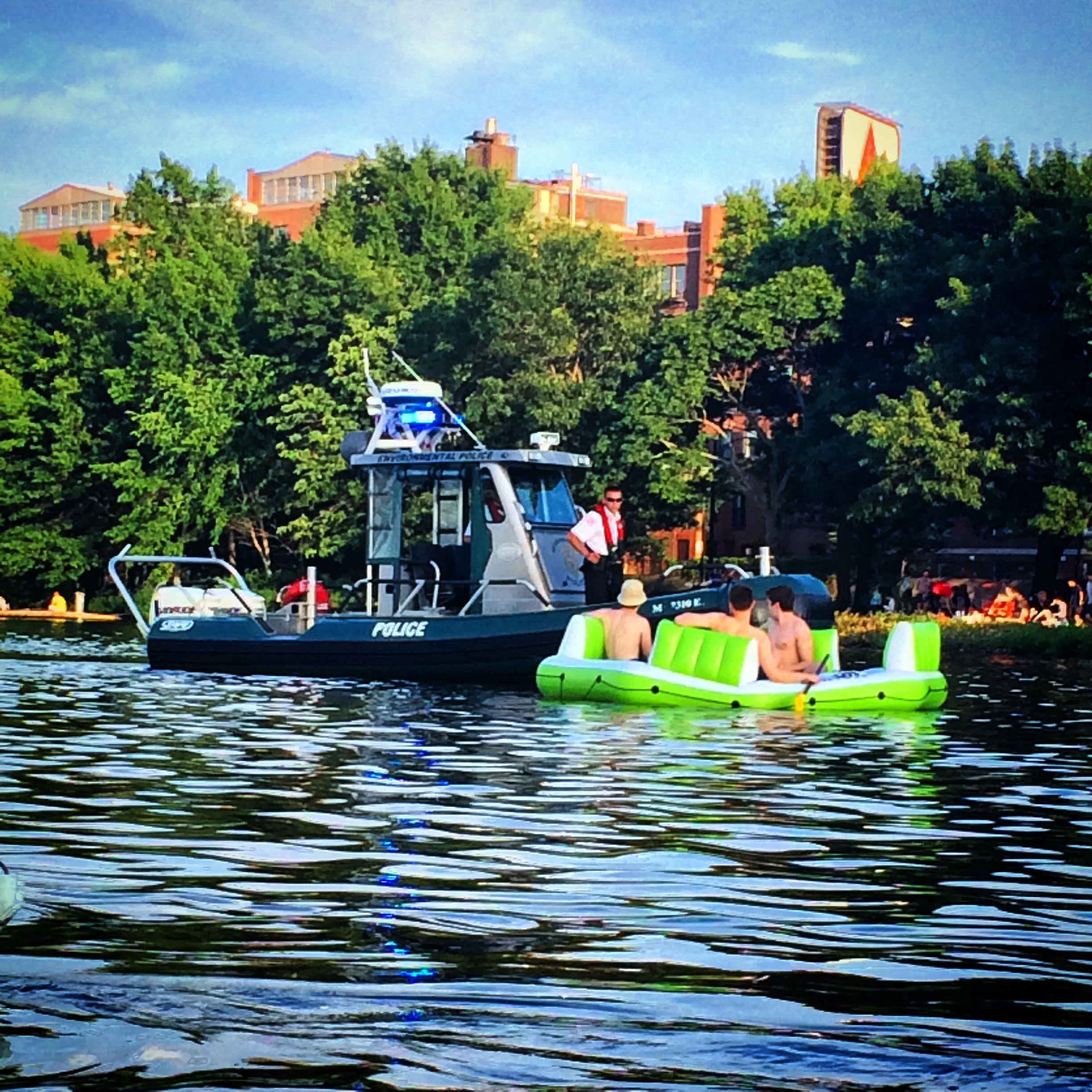 “Gentlemen, you must have life preservers to be out here,” boomed the state police patrolman from the first of many state police marine units we’d see. We were passing by a group of three shirtless guys in a green inflatable raft that looked more like a beach-ball than a boat as we approached the Mass Ave bridge. “Sorry officer, we don’t want any trouble,” one of the guys responded quickly and politely… “You need to vacate the area, you can’t be our here without life jackets,” the trooper continued sternly as we passed by… 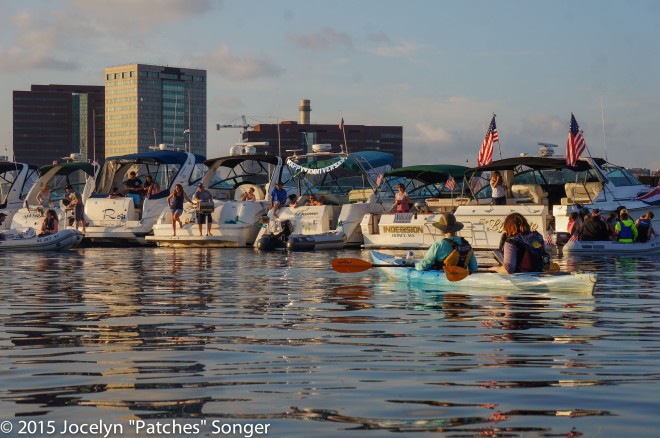 After passing the state troopers, we paused for a minute to decide whether we’d stay on the west-side of the Mass Ave bridge in the blue anchorage zone, or pass through the designated channels by the barges to the red anchorage zone on the east side with the big boats… The folks at the rental agency had strongly recommended staying on the West side of the bridge, assuring everyone that they views there were just as good, but we weren’t convinced… 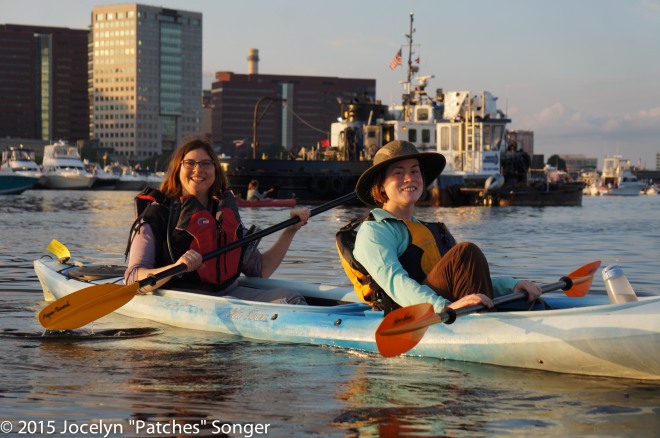 A few things compelled us onwards: the opportunity to be closer to the Pops concert, the fact that the winds were blowing out of the northeast (if the wind directions stayed the same the fireworks fallout would be to the west), and the idea of getting to watch the fireworks without the Mass Ave bridge obstructing our view of the barges.

As we passed under the Mass. Ave. bridge it seemed like we were the only boats moving except for the patrolling state troopers… “Uh oh, did we read the rules correctly? Are we allowed to pass through here?” We wondered as we paddled towards the oncoming state troopers… 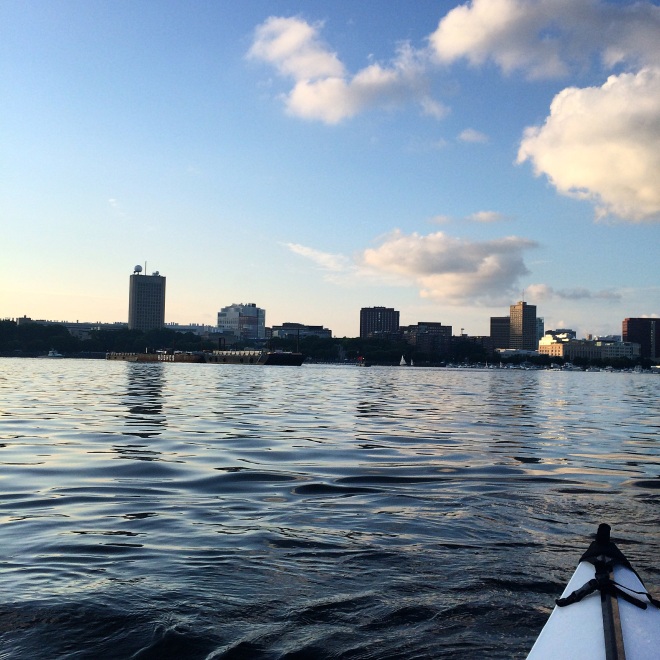 The round, orange buoys floating at intervals along the shore clearly indicated the restricted shore areas, but the markers indicating the safety zone around the barges wasn’t obvious to me… 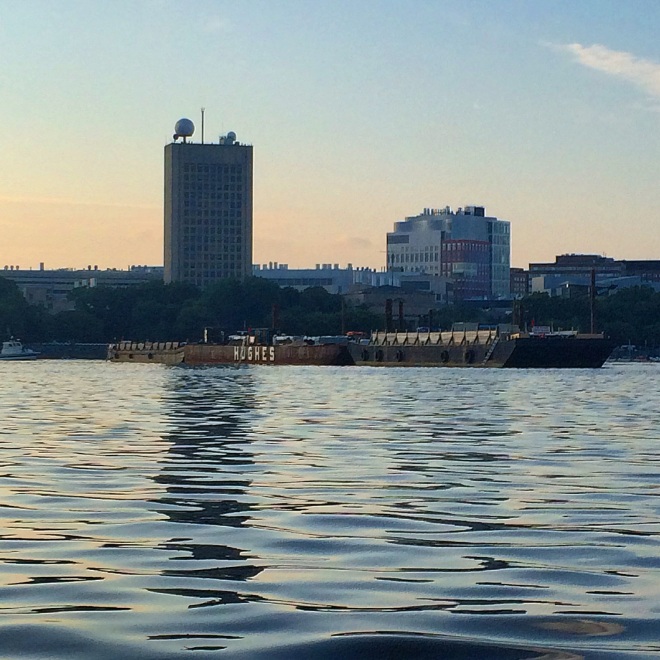 “Are they going to stop us? Did we miss something?” It was an unsettling feeling, paddling by the state police boats and hoping that we were in compliance with all of the rules, but we passed the patrol without incident and continued paralleling the crowds on the esplanade until we reached the flotillas of yachts in the red anchorage area. 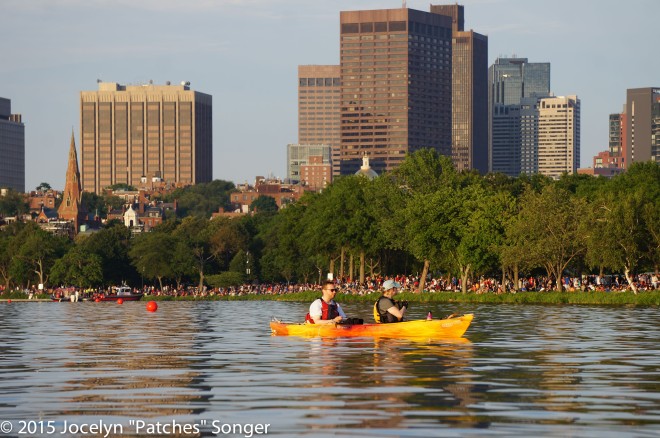 It wasn’t until we started making our way through the big boats towards the middle of the river that the tall white cylindrical buoys marking the boundaries of the safety area became apparent. 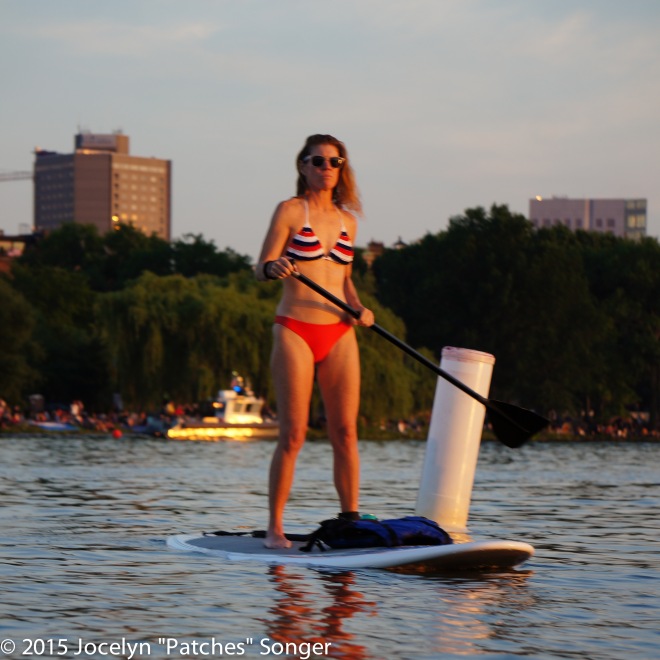 “Kayakers, you cannot enter the shore area,” boomed a voice on a megaphone behind us… We looked up and saw the state police approaching a group of kayakers that were attempting to land on the esplanade. “Kayakers! Vacate the shore area!” The police presence was unmistakable and absolutely everywhere. 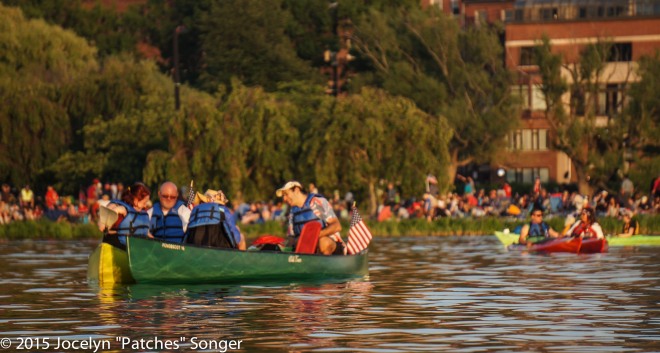 At 7:30 pm, we picked a spot at the edge of the safety zone near the mid-line of the river to anchor our kayaks and have our picnic dinner. I’d never anchored a kayak before, so it took me a couple of tries to figure out how to compensate for the drift, drag, wind, and currents to make sure we stayed on the ‘safe’ side of the boundary buoy. Once I figured it out, I was confident that we had the best seats in the house! 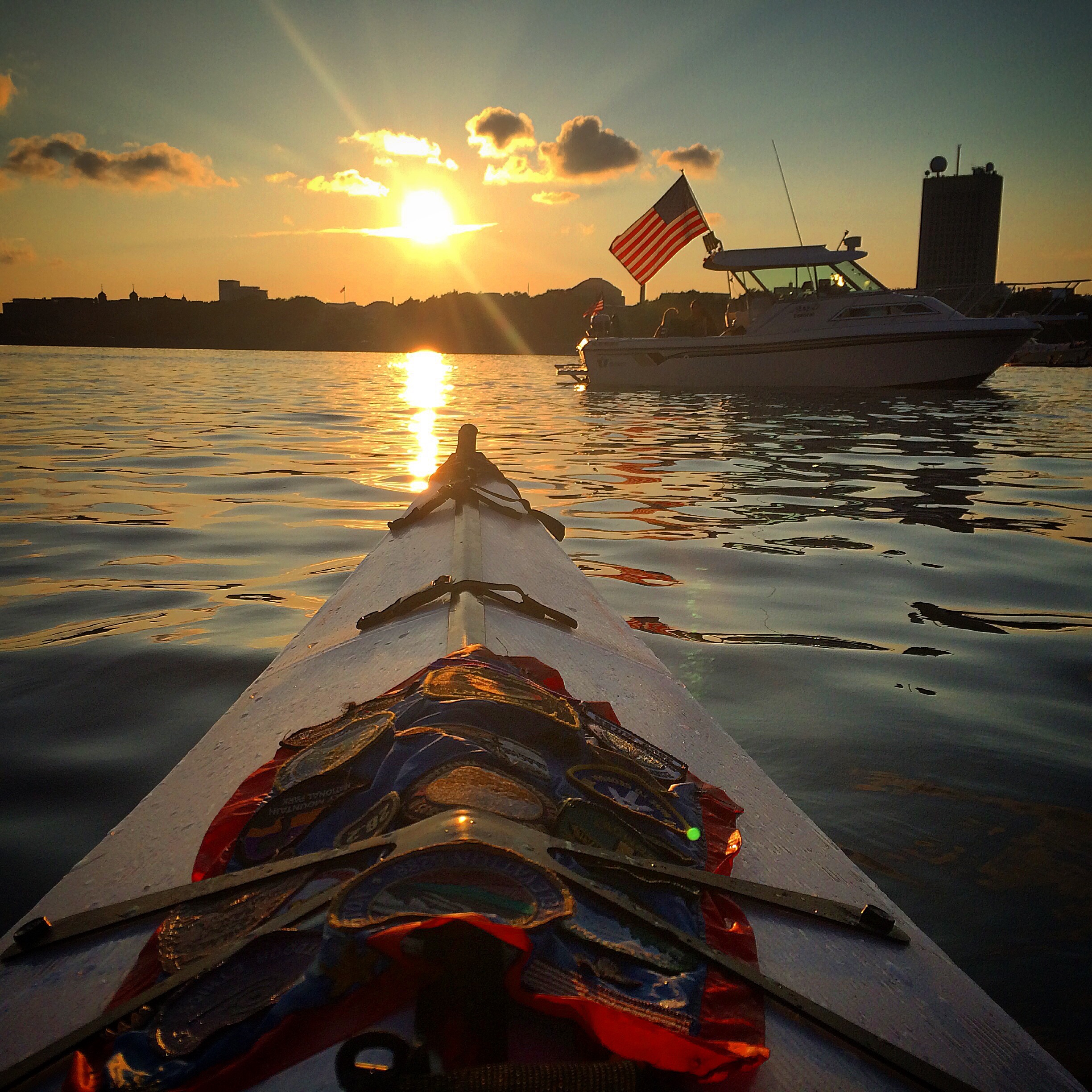 As we relaxed and ate our picnic dinner were marveled at our good fortune and our amazing spot… the pouring rain was long gone, the skies were clear, and we were in the perfect location to watch the sunset behind the MIT dome as we waited for the show to begin… the evening was already off to a good start, and there was still 3 hrs to go before the fireworks started! 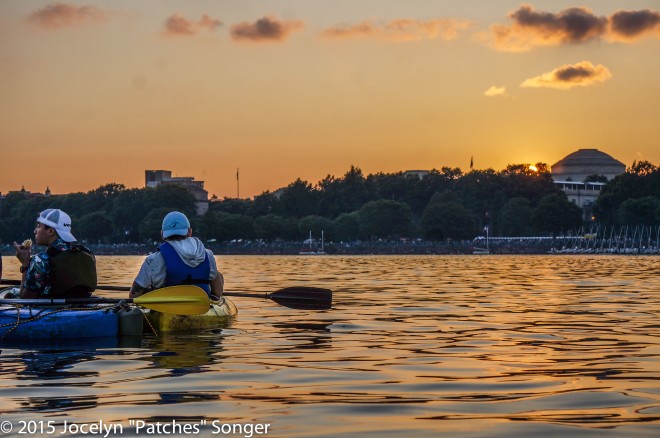